Outer-borough business districts in New York bounce back as residents have a new appreciation for playing, dining and doing business close to home

In Flushing, sidewalks on the blocks surrounding the 7 train stop at Main Street and Roosevelt Avenue are packed, as residents and regional visitors get back to the shopping, dining and personal care routines that have allowed hordes of new businesses to reopen on the heels of a wave of Covid-related closures.

“I was impressed by how fast we bounced back as a community,” said Dian Yu, executive director of the Downtown Flushing Transit Hub Business Improvement District. The resurgence is due to regional visitors and the everyday routines that bring families out to spend on dim sum, groceries for the week and various beauty treatments, he said. Since Covid, nearly a half-dozen new bubble tea spots have joined several already in the neighborhood. There, the neighborhood’s young people now sip drinks and socialize. In addition, steady real estate deals keep an array of lawyers’ and accountants’ storefront offices in business.

That locals are staying put near their homes is clear in the numbers. Subway ridership has yet to recover beyond 70% of its pre-2020 level. Foot traffic on main drags such as Times Square, or even relative comeback leaders like the Flatiron-NoMad neighborhood, is only about 80% as busy as before. About half of office workers are at their desks in Manhattan on any given day, according to the latest Partnership for New York City survey. 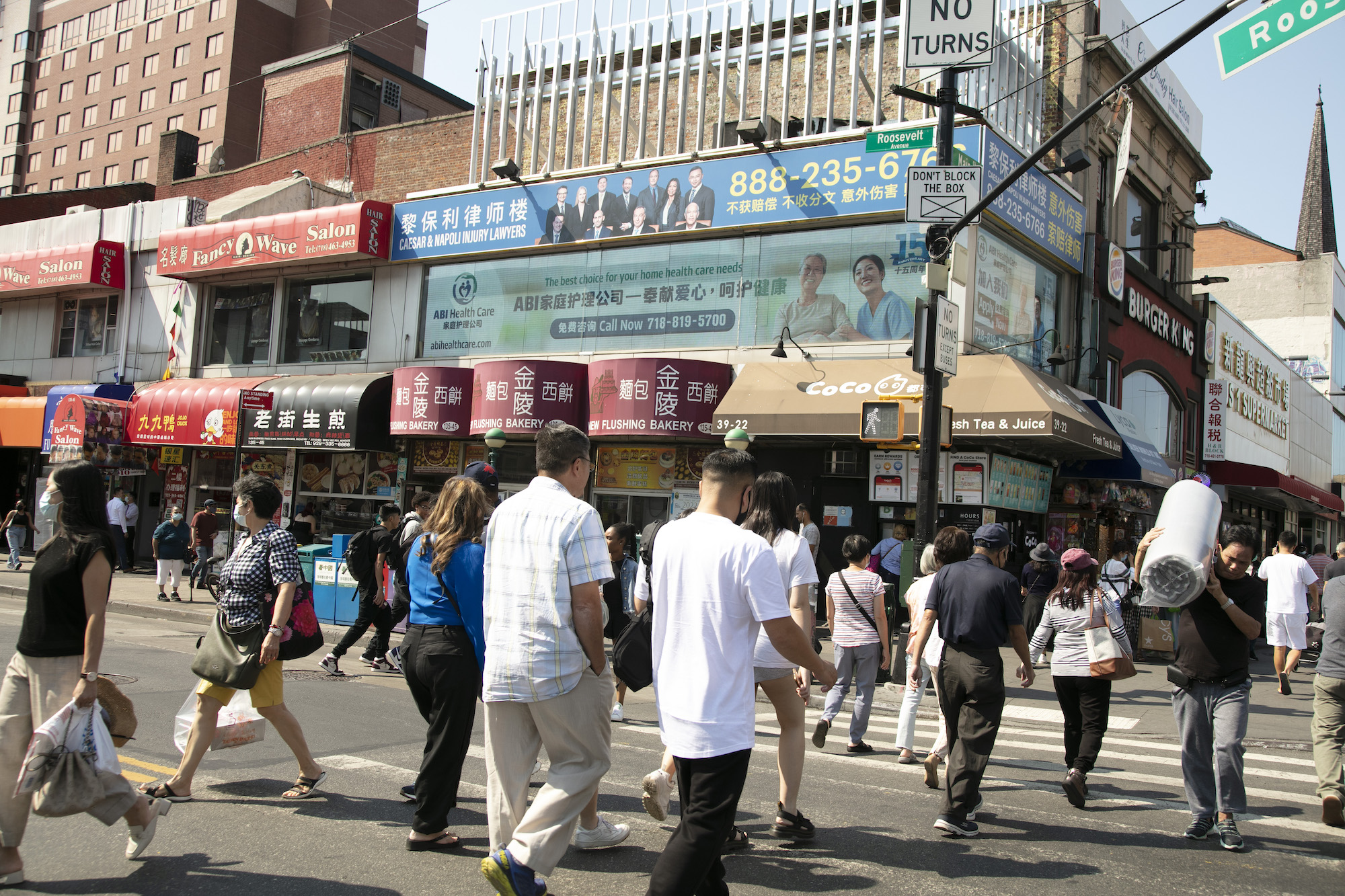 The corner of Main Street and Roosevelt Avenue in Flushing, Queens.

By contrast, Downtown Brooklyn has seen a steady rise in the number of companies in the area in the past decade, with more midsize design and professional firms signing leases by the month. That means that even for those Brooklyn professionals who are back to work, commutes may be shorter, and time spent near home is still copious.

Fifth Avenue in Park Slope is quieter than it is in Flushing, but still, the steady stream of families making their way up and down has led to a successful first year on the strip for Rolando Balboa’s Brooklyn Fencing Center.

“I don’t have to do advertising,” he said. “People are just coming.”

So many people walk by that the store itself serves as the only outreach he needs, he said, and he has enough momentum that he is planning to expand to Downtown Brooklyn. Balboa had been in operation for more than a decade in other parts of Brooklyn, but his arrival on Fifth Avenue in May 2021 was part of a surge in openings in the area that brought the retail vacancy rate down from 15% to 4%. That surge included at least one company that crossed the East River from Chelsea: Midoriya, a Japanese grocery store. The influx to Fifth Avenue reverses a slight depression of the late 2010s, when some local retailers were struggling to make ends meet because of the growing popularity of e-commerce.

All told, the Fifth Avenue BID counts 55 lost businesses between March 2020 and early September of this year, said Tallantire, the executive director. But there have been 86 openings, and an additional seven businesses are under construction. About half of the new spots are not eateries, Tallantire said, including services and activities such as fencing, chess and science, reflecting a larger shift. Manhattan had a net decline of 244 private establishments in the arts, entertainment and recreation sector; Brooklyn gained 57, according to the city comptroller.

Eateries had a high turnover before Covid-19, but only Manhattan lost net private establishments in the accommodation and food services sector, the comptroller’s data showed.

Twenty blocks north and slightly east of the Fifth Avenue boom, restaurants are reviving the empty juncture of Sixth, Flatbush and St. Marks avenues. That’s where the pandemic-era fried chicken pop-up Pecking House opened its first brick-and-mortar shop in early September. Pecking House came out of co-founder Eric Huang’s effort to help a family-owned Chinese restaurant in Queens stay in business. The Eleven Madison Park-trained chef began offering fried chicken with sides made from both Southern American and Taiwanese flavors for delivery in the spring of 2020. Quickly, orders piled in, and a 10,000-person waiting list amassed. Because Huang and co-founder Maya Ferrante were doing all their own sales and delivery, they ended up with access to prize location data.

“We were able to see that we were doing the majority of our delivery in Brooklyn—Prospect Heights, Carroll Gardens, Brooklyn Heights—and it just made sense to us,” Ferrante said. The restaurant no longer delivers. It didn’t hurt that they live walking distance from the space, the co-founders said, or that a build-out would be much less expensive in Brooklyn than Manhattan.

On Sept. 9 the co-founders peeled back the paper that had covered the large windows since the previous restaurant shuttered in 2019. Service begins at 5 p.m. On each of the first four days they were open, lines began forming around 4:30 p.m., they said. They found that settling into the neighborhood and helping drive its comeback gave them renewed focus and energy.

“The food is the best it’s ever been,” Huang said.

In April 2020 the Tompkins Avenue Merchant Association launched its Open Streets program. Restaurants, clothing stores and coffee shops on the commercial strip gathered with entertainers and residents for what became a block party that attracted New Yorkers from around the five boroughs. Close to 2,500 participants come on a given Open Streets day, said Blondel Pinnock, president and CEO of Bed-Stuy Restoration Plaza, which fosters economic development in the area.

The strip, which includes more than two dozen small businesses, is one of several that are thriving in Bed-Stuy, where vacancy rates have dropped by as much as 10% in certain commercial corridors, said Oma Holloway, chief operating officer of the Bridge Street Development Corporation in Bed-Stuy. 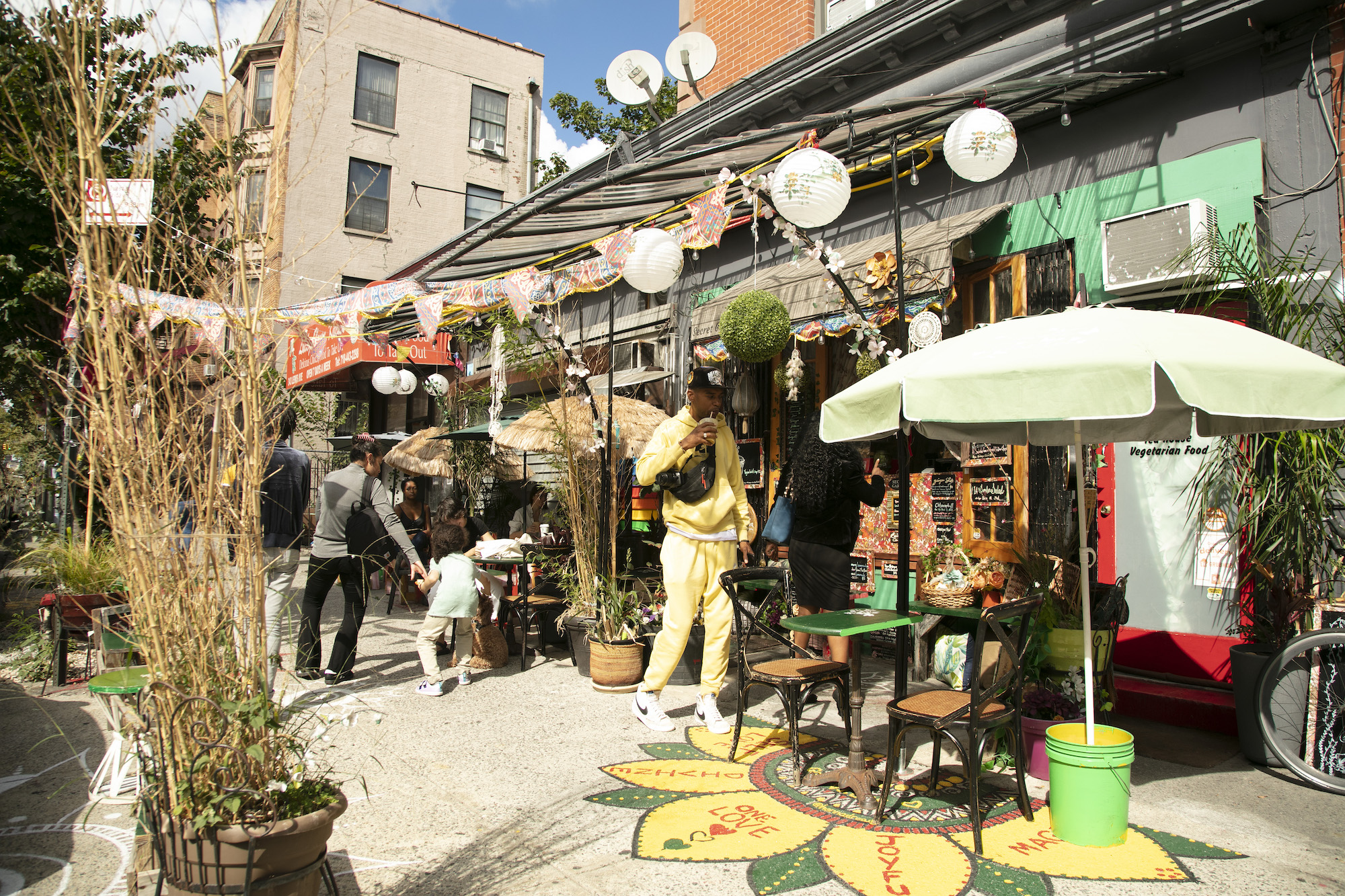 Vacancy rates have dropped by as much as 10% in certain commercial corridors of Bedford-Stuyvesant, Brooklyn.

On Tompkins Avenue alone in recent months, the bar Oddly Enough quickly took over the space of restaurant Eugene & Co. when it closed; longtime restaurateur Myriam Nicolas expanded her café Brooklyn Brown Butter to a second location, where she sells ice cream; and Greedi Vegan began selling meat-free comfort food. At the southern end of the corridor, by Fulton, supermarket Met Fresh opened over the summer. Another standby, Peaches Hothouse, had enough momentum on Tompkins to open a second location in Downtown Brooklyn. Around Bed-Stuy, the list of entertainment and arts venues includes the Billie Holiday Theatre and the recently opened arts space the Laundromat Project.

“What I am seeing is that community-based organizations are doing partnerships and collaborations to enhance the business corridors,” Pinnock said.

The city added two new official business improvement districts earlier this year, bringing the total to 75. But that doesn’t count the unofficial merchants organizations that have worked hand in hand with businesses in the past two years to help them build a social media presence, pilot city programs such as e-scooter rentals, or apply for state and federal relief funds. Nearly all the brick-and-mortar businesses in the Bronx that come to the Lehman College Small Business Development Center have questions about how to bolster their e-commerce, with the goal of keeping revenue high enough to afford rent, interim director Jackeline Rosero said.

Other efforts are on the surface.

Kiki Layne ‘Cut’ From ‘Most’ of ‘Don’t Worry Darling’

Taboola sells one-quarter of its shares to Yahoo