10 offbeat holiday events and exhibits to check out in NYC

The thing about tradition is, it never gets old. And in New York City during the holidays, there are some annual traditions that just make the city magical — the Rockefeller Center Christmas Tree, lights on 5th Avenue, the Bryant Park holiday market, and Santa at Macy’s to name a few. And while these tried and true mainstays will never go out of style, it is nice to switch it up once in a while. We’ve rounded up some lesser-known holiday events and activities to mix things up this holiday season in NYC. 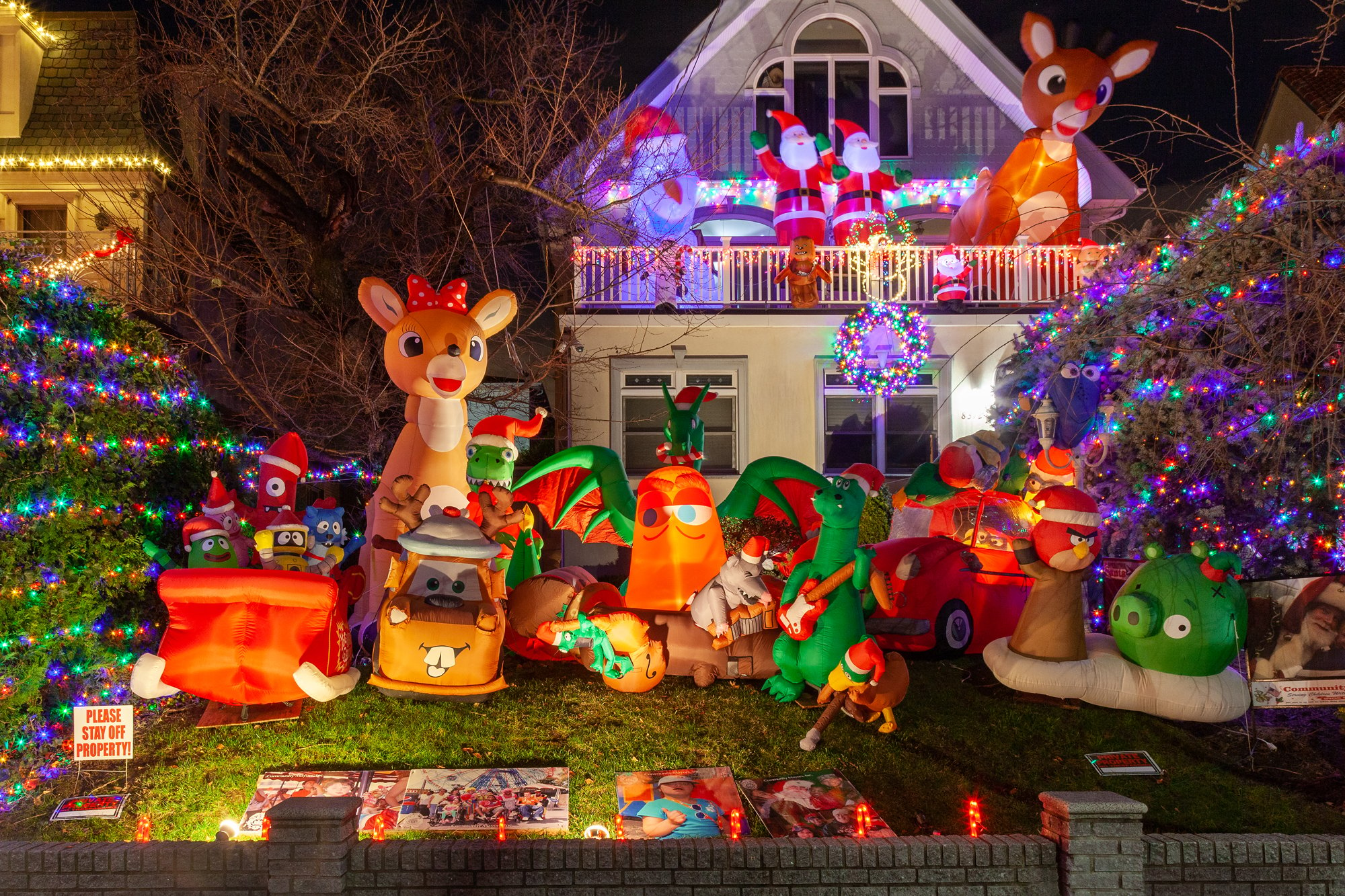 The Dyker Heights Lights event in 2018; Photo by James and Karla Murray exclusively for 6sqft

Dyker Heights Lights
By now, the secret of the Dyker Heights Lights has gotten out. But, it’s still a great alternative to Manhattan’s glitz and glam. The charm of these neighborhood lights is that they are put on by the residents of Dyker Heights themselves. Way out at the tip of Brooklyn, the houses in this residential neighborhood go all out each year with their light displays — and we mean ALL out. With piles and piles of sting lights, animatronics, and singing displays, walking these streets will undoubtedly fill you with the holiday spirit. Pay for a guided tour or make your own way out there via the subway. When you’re ready to go inside and warm up, there are some charming local diners and no-frills eateries where you can sit back and enjoy some comfort food.

“Peter & the Wolf” by Sergei Prokofiev with Issac Mizrahi
Designer Isaac Mizrahi is known in the fashion world, but he’s broken into theater in a big way, most recently making his Broadway debut in “Chicago.” He also adds some theatrical flair to the holiday season with his production of “Peter and the Wolf” at The Guggenheim. Not only does Mizrahi design the costumes (naturally), but he directs and narrates the classic children’s play by Sergei Prokofiev, which is performed with a live orchestra. The show runs December 10 and 11 with three performances on each day.

Jane Lynch & Kate Flannery: “A Swingin’ Little Christmas”
Jane Lynch, known for her comedic performances on shows like “Glee” and “Marvelous Mrs. Maisel” teamed up with actress Kate Flannery of “The Office” fame and Tim Davis, who was a producer on “Glee” to record a Christmas album, “A Swingin’ Little Christmas.” And from December 2-4, New Yorkers can catch the trio live in concert at the Public Theater. The show features original carols sung in classic 1950s and 60s style…but with a not-so-classic comic flair. It may be the only time you’ll hear the lyrics, “Mom got drunk and passed out on the bathroom floor” in a Christmas carol! 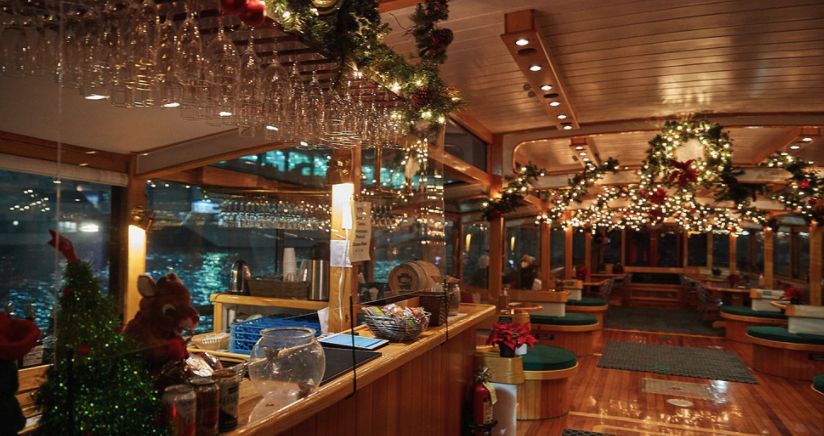 NYC holiday cruise
Check out NYC by sea — well, by river. Classic Harbor Line, which is known for its sightseeing cruises of the city, puts on a number of special holiday boat rides. Choose from daytime brunch cruises, “cocoa and carols,” a swanky jazz cruise, a New Year’s Eve champagne-tasting cruise, and more. The 1920s-style yacht is a classic backdrop that gets decked out (pun intended) in garland and lights for the holidays. Enjoy the cozy wood interior while taking in views of the Statue of Liberty and the skyline. Most cruises include a complimentary libation.

Chanukah on Ice
There are tons of menorah lightings around the city to celebrate Chanukah, but have you ever ice skated with a life-sized dreidel? Now’s your chance! A tradition of the past 15 years, Chanukah on Ice at Central Park’s Wollman Rink is back. There will be traditional Jewish music, kosher food, and an ice sculpture menorah to celebrate the second night of Chanukah on Monday, December 19. 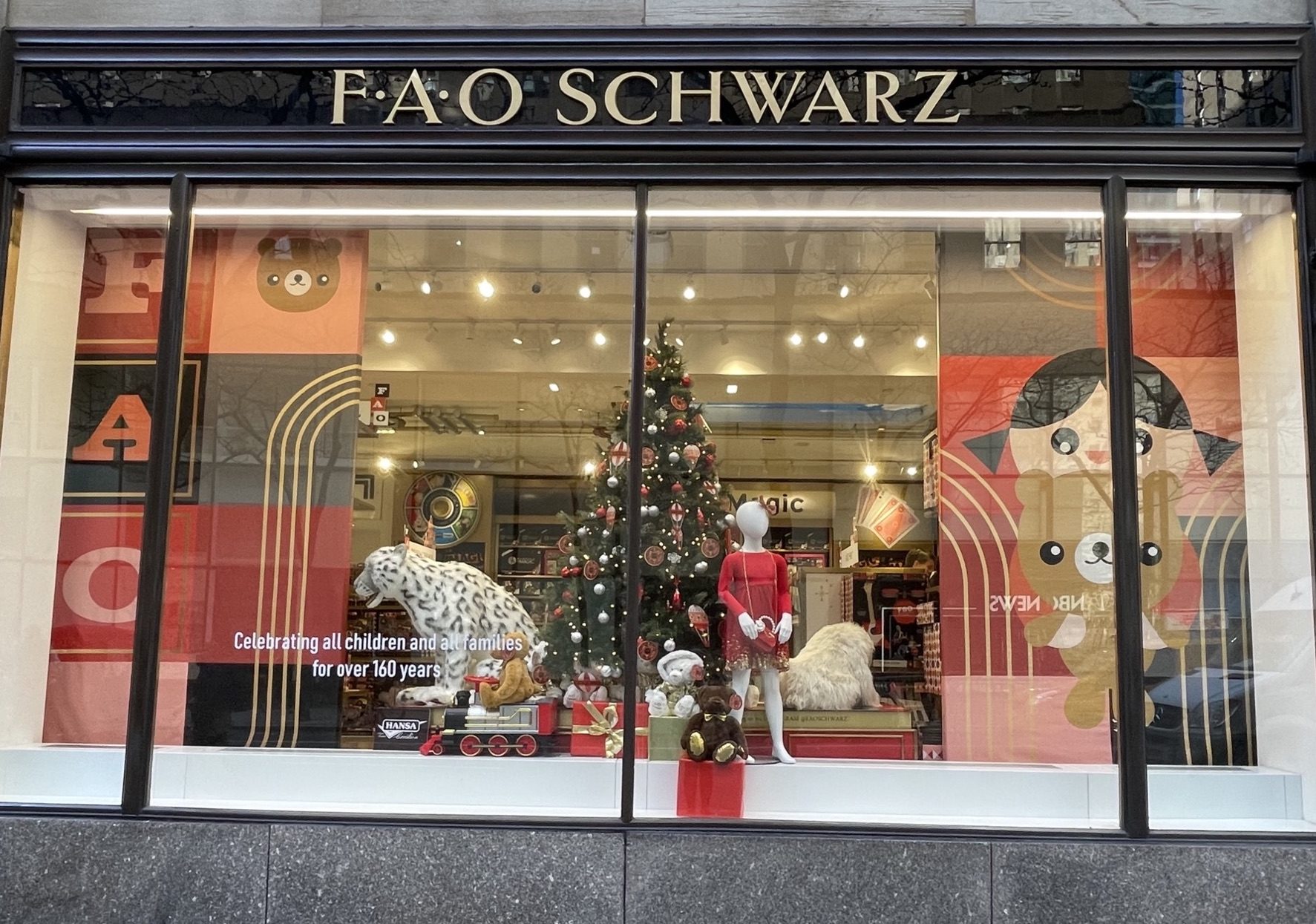 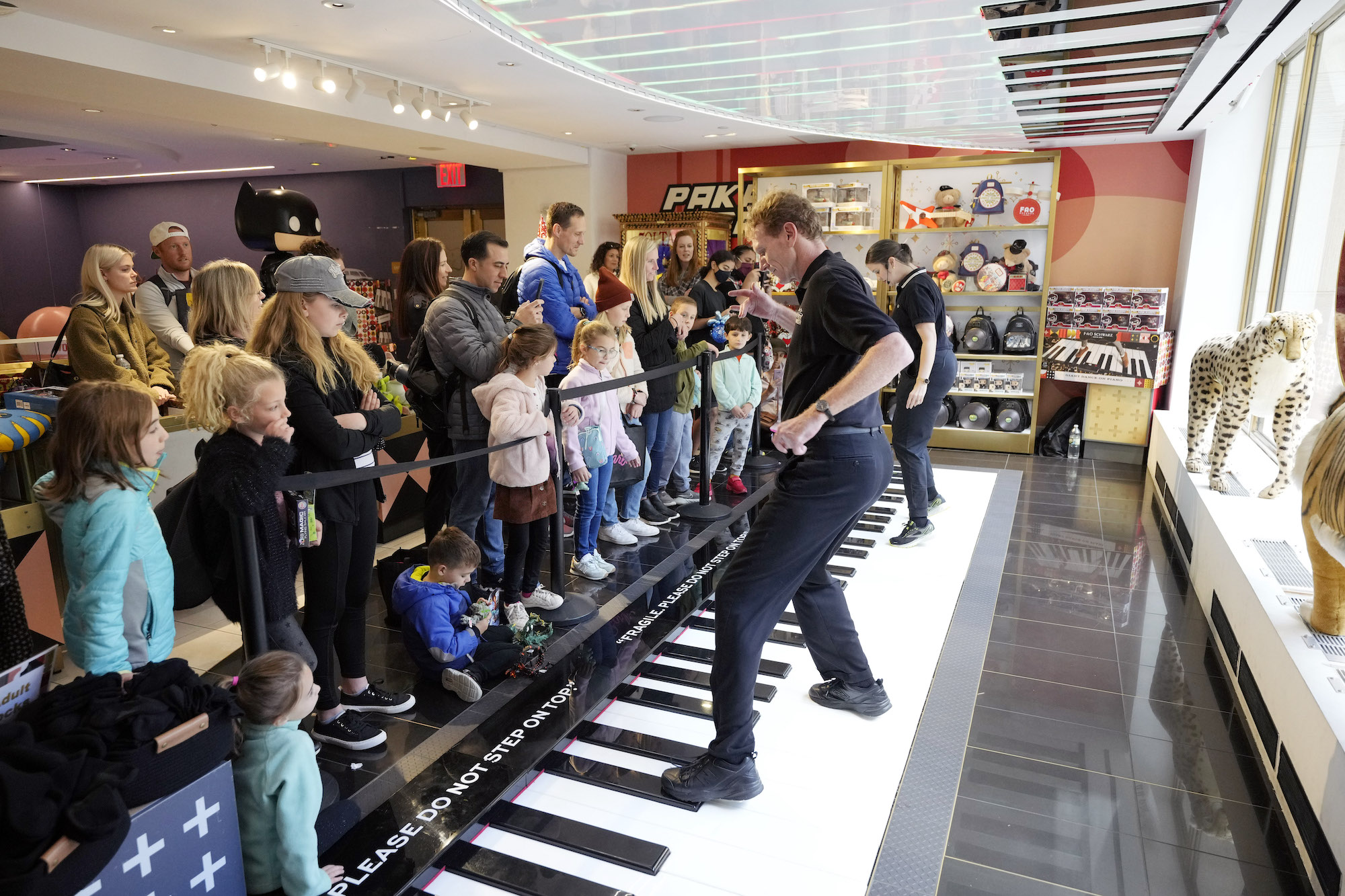 FAO Schwarz celebrated 160 years of toys at their flagship store at Rockefeller Center in October; 2022 in New York. The FAO Grand Piano is a famous destination at the iconic store. Photo: Charles Sykes/AP Images for FAO Schwarz

FAO Schwarz tour
FAO Schwarz toy store has been a magical place for children for 160 years. During the holidays, take a peek behind that magic curtain with the Toy Soldier Tour. The hour-long tour is hosted by a toy soldier and includes insight into the iconic institute and a small history lesson. But tots will likely be most excited by the candy bar access, free plush toy, and personal shopping experience.

“Love Actually” screening
Sure, you could perch up on the couch with some snacks and veg out during your own personal annual “Love Actually” screening. Or, you could get dressed and make a day of it. The Alamo Drafthouse, a unique movie theater that offers in-theater dining and drinks as well as a bar for before or after the movie, is hosting a brunch screening of the modern classic. Head to Downtown Brooklyn on December 11 to indulge in this holiday rom-com with like-minded fans. Not your favorite movie? The theater is also hosting showings of “Elf” and “National Lampoon’s Christmas Vacation” this season.

“A Christmas Story” screening
We can’t talk about classic holiday movies without mentioning “A Christmas Story.” The movie is so iconic it even spurred one of 2022’s favorite things: a nostalgic reboot. The sequel, featuring the original Ralphie all grown up, is streaming on HBO Max. But if you prefer the classic, head on over to Staten Island. Scott Schwartz, who played Flick, will be on hand for a Q&A after a special showing of the 1983 movie at St. George Theater on Nov. 27. It’s part of the theater’s classic movie series, which has screened “The Godfather,” “Grease” and “Rocky Horror Picture Show” this year. 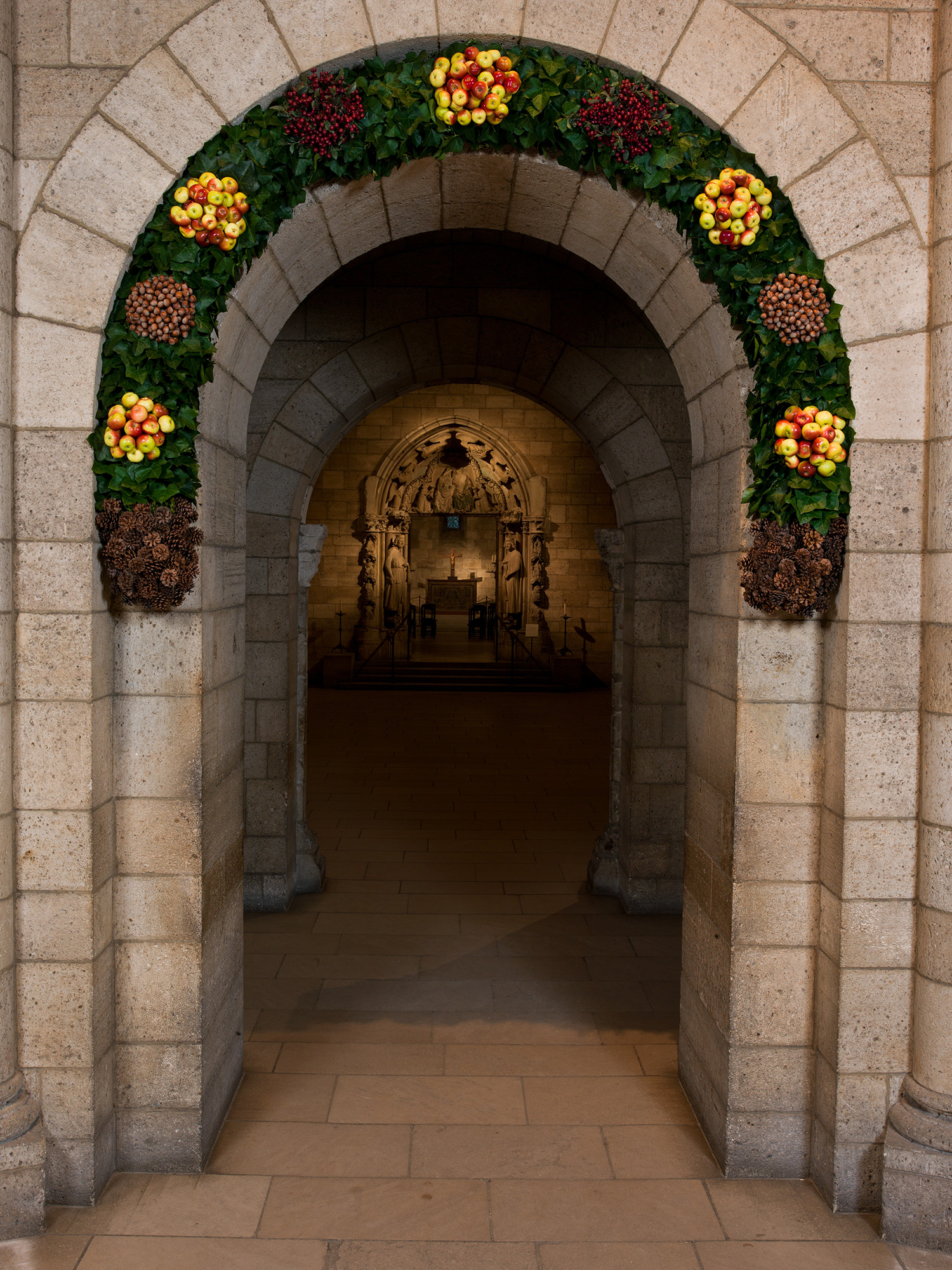 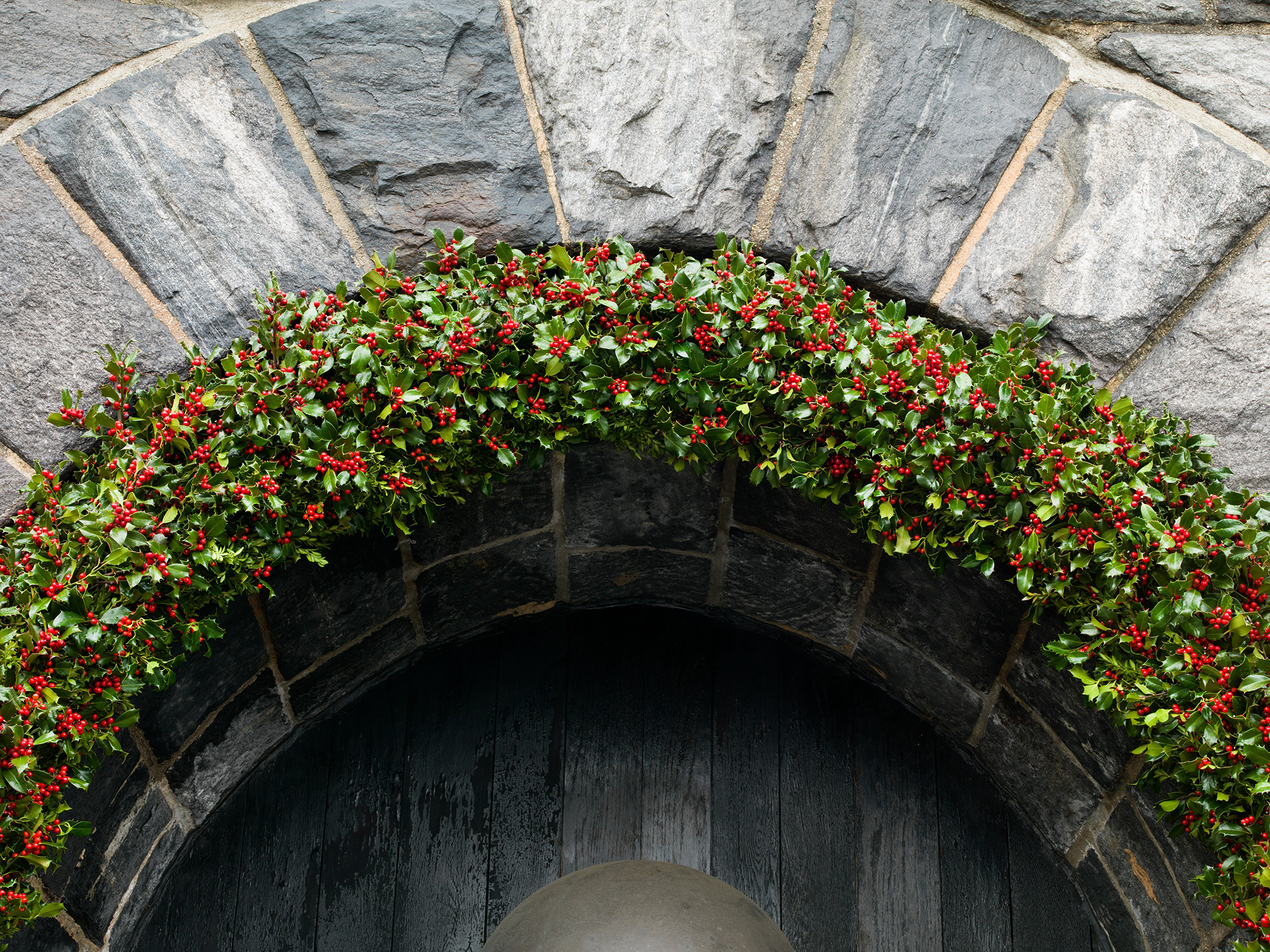 Medieval “Christmastide” decorations at the Cloisters
Did you know there is a medieval cloister in New York City? The Cloisters, part of the Met Museum, is a beautiful medieval castle and gardens located high atop Fort Tryon Park in Washington Heights, boasting views of the Hudson River. While it’s a sight to behold any time of year chock full of artifacts and tapestries, during the holidays it’s decked out to the max. The decorations are reminiscent of what was used back in medieval times during Christmastide, a feast that took place during the 12 days of Christmas (Dec. 25 – Jan. 6). The wreaths, garland, and topiaries will be up from Dec. 15 – Jan. 8. 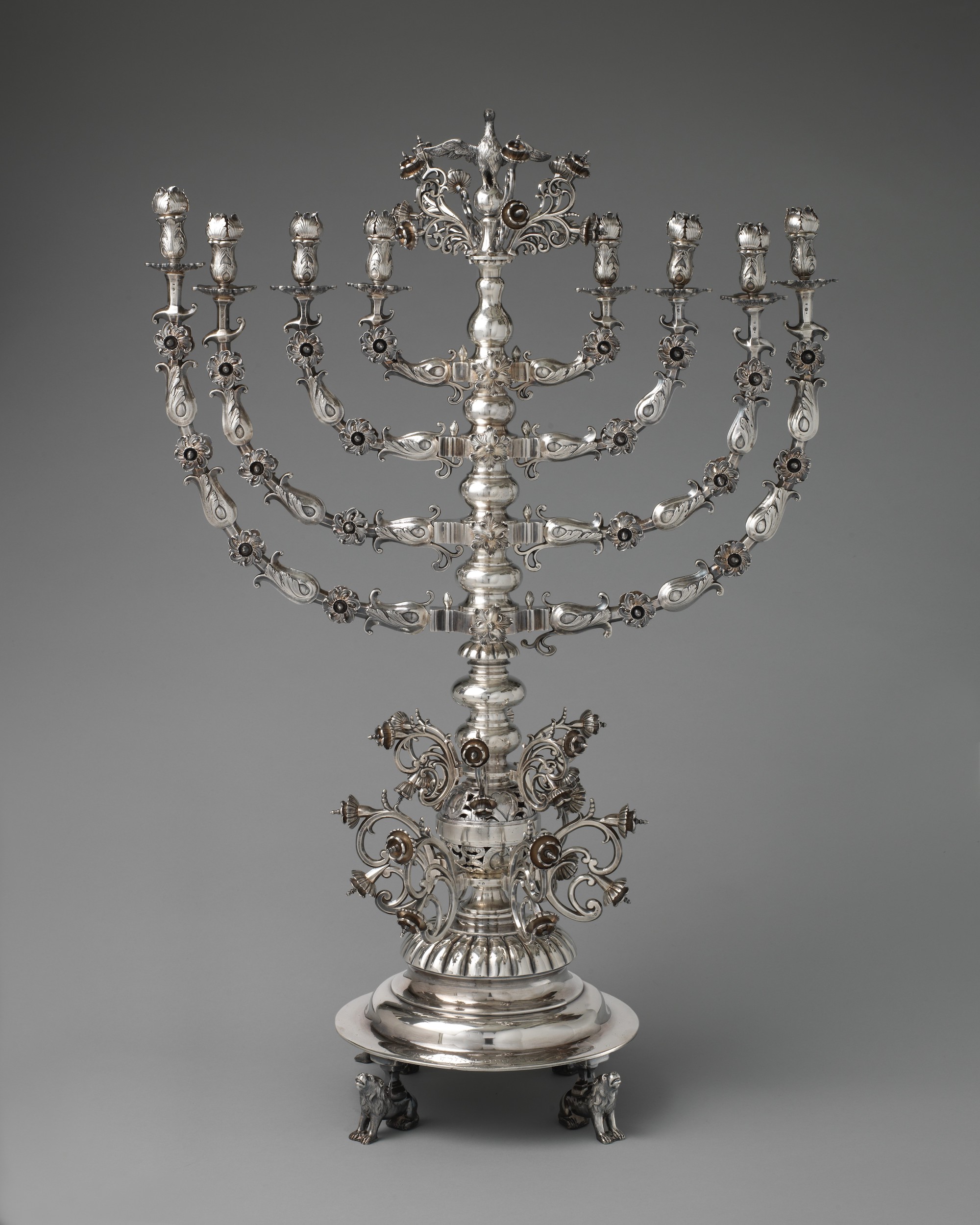 A 19th-century silver Eastern European menorah
One of the largest silver Hanukkah menorahs known is on exhibit at the Met. At nearly three feet tall, the elaborate piece was made in 1866–72 and can be seen at the Iris and B. Gerald Cantor Galleries. It’s on loan from the Moldovan Family Collection, which consists of many historical Jewish artifacts. According to the Met, it was originally created for the Great Synagogue in Lviv, which is present-day Ukraine.

A Month in a Tuscan Villa Didn’t Fix My Burnout

For $1.6M, two bedrooms and a terrace in the treetops of Brooklyn Heights